Everyone screws up, everyone makes mistakes. When we err, hopefully, someone pulls us aside and tells us about our blunder. Feedback, when delivered on time and in a constructive manner, is critical to learning and growth. Three things that have made my feedback stick: 1 provide it as quickly as possible, 2. be firm and kind, and 3. suggest how you would have acted in that situation.

Bill is a promising PM on the team. He has excellent product insight and can execute projects well. However, he struggles with selling his ideas to the Bigwigs. Good ideas get rejected, and people leave the room in confusion.

During his annual performance review, Bill gets feedback from his manager Amy: “Bill should work on his communication skills. In particular, he can do a better job selling his ideas to executive leadership.”

As an aside, this is the reason that annual reviews are mostly a waste of time from a learning and growth perspective (though they are necessary for other purposes). By the time yearly reviews come around, the illustrative events have become a faded memory, and the opportunity for learning is lost.

2. Be Firm and Honest. Be Kind and Human.

Joe gets a code review request from Rita. It’s not an outstanding PR. The code is hard to read, and she didn’t include unit tests. Joe doesn’t want to hurt Rita’s feelings. He knows she’s trying hard. She is new to the company and doesn’t know the standards. He accepts it, making a note to himself to go back and add tests and fix things up.

Oops - Joe just lost a valuable opportunity to give feedback because he was trying hard to not hurt Rita’s feelings.

On the other side of the room, Adam sends some code over to Lisa. Lisa is a veteran and has been with the company forever. Adam is new and less confident, given his background. He doesn’t know the company’s style guide, and frankly, doesn’t see the value of having consistent code style. Lisa blasts the code review and publicly questions Adam’s knowledge and standards, using aggressive language. In short, she is being a jerk.

Another lost opportunity - given Lisa’s demeanor, Adam will get defensive and refuse to listen to feedback, likely to repeat the same mistake again.

Sidebar: A clash of cultures

We can look at communication challenges as a clash of two cultures: Ask Culture and Guess Culture.

In some families, you grow up with the expectation that it’s OK to ask for anything at all, but you gotta realize you might get no for an answer. This is Ask Culture.

In Guess Culture, you avoid putting a request into words unless you’re pretty sure the answer will be yes.

In ask-culture environments, people have no qualms about asking for things, favors, help, things they want. They also expect to get turned down a lot.

In guess-culture environments, people don’t ask for something unless they are reasonably certain the answer is yes. And even then, in these cultures, the appropriate thing to do may be to refuse the help and let the helper insist on helping.

Your boss, asking for a project to be finished early, may be an overdemanding boor – or just an Asker, who’s assuming you might decline. If you’re a Guesser, you’ll hear it as an expectation.

This is a spectrum, not a dichotomy, and it explains cross-cultural awkwardnesses, too: Brits and Americans get discombobulated doing business in Japan, because it’s a Guess culture, yet experience Russians as rude, because they’re diehard Askers.”

– Askers vs Guessers, The Atlantic

What happens when an Asker meets a Guesser?

Keep these differences in mind when delivering feedback and tune your language appropriately!

3. How would you approach the problem?

Pointing out problems in time gets us halfway there. The rest of the way is teaching someone how to do it better. While nobody is perfect, the person giving feedback typically has some additional information - in the form of more experience, or broader context, or greater depth - that they can use to help the recipient.

Back at Facebook, we were working on Stories, and things weren’t going particularly well. We were in the doldrums; the team was getting unmotivated. Chris Cox, Facebook’s then Product Chief, suggested writing a note explaining why Stories mattered, to get the team excited. Adam Mosseri, my boss, suggested that I take this challenge, and I enthusiastically signed up.

And utterly failed. I could not, for the life of me, write something that came across as remotely engaging or motivating. I’m used to writing dry, technical docs. Even now, my writing tends to be terse and to the point, not exactly motivational speak.

After giving me some time to struggle, Adam checked in. And he asked if I’d prefer he write it this time. And in about 10 minutes he wrote one of the best, heartfelt notes, about our work. People loved it. And I learned how to write better.

When the person giving feedback also illustrates with an example, when your coach tells you what to do, in addition to pointing out errors, it dramatically increases your ability to learn.

I suggest following up with “here’s how I’d do it” - not merely as a thing to copy (though that is perfectly fine), but as a means of illustrating and teaching. Encourage the recipient to take what they like, make it their own, and get better.

Note that this is different from “micro-management.” You’re not telling people exactly what to do and how to do it. You are teaching what you know and encouraging them to find their path.

I strongly recommend Kim Scott’s Radical Candor (book, 20m YouTube video) as an easy to understand framework on how to deliver feedback. She espouses a 2x2 (my friends know how much I love 2x2s) that goes something like this: 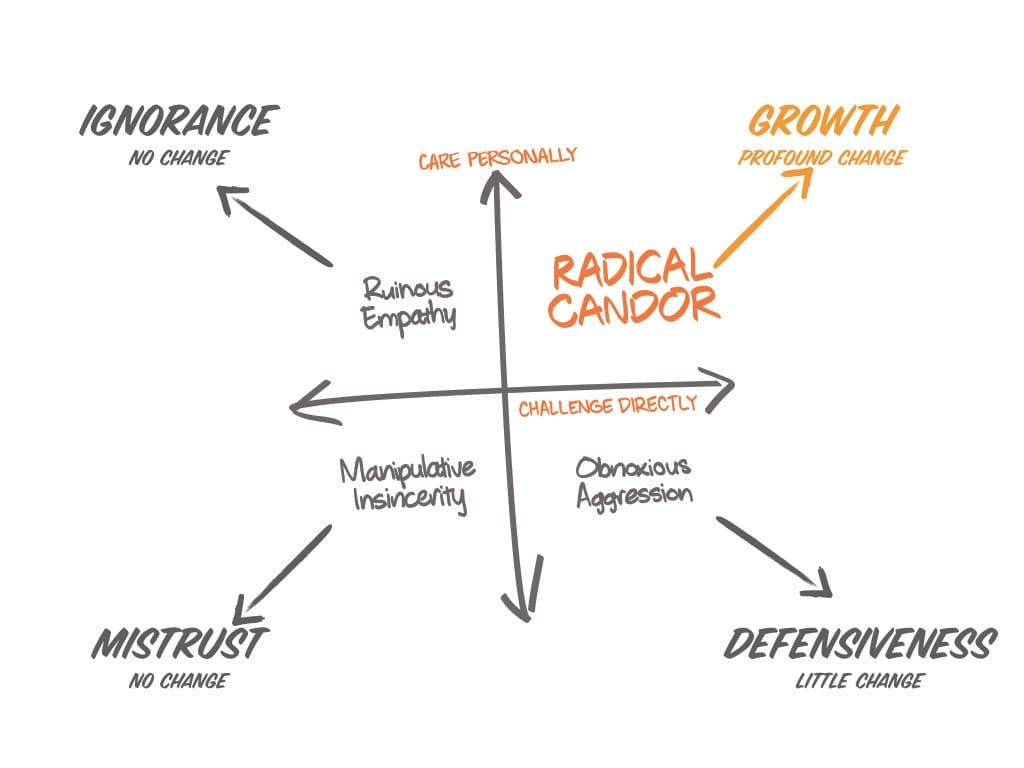 The central idea behind Radical Candor is to care personally and challenge directly.

Caring personally is to care about your report’s well-being and growth at a deep, emotional level. This care should go across the current project and team. Many people who reported to me are close friends to this day, across organizations, and companies. Some of my best bosses have cared deeply about me, and my well-being - not only are we still friends, but I’d work for any of them again in a heartbeat.

To directly challenge someone, you have to be able to tell them, to their face, when they’re screwing up; when they’ve let you down; when they’ve disappointed you. You expect more, you know they can do better, and you invest in them by telling them to step up.

Scott uses these two axes to create the above 2x2: any of the three quadrants in gray result in little or no change in employee behavior, while the 4th orange quadrant helps people get better.

I’d encourage you to at least watch her video and ideally, buy and read the book.

This is the first of three notes on Feedback. This note is the practical punchline: how to give effective, constructive feedback, without being an asshole or being overly empathetic.

I’m your host, Rushabh Doshi. After spending nearly a decade managing some of the brightest engineering teams at Facebook and YouTube, I’m taking a break and doing some writing, spending time with my family and figuring out my next thing.

If you enjoy these articles and would like them in your mail, please subscribe to my newsletter.